Facing the new reality affected by COVID-19 pandemic, Polish Cultural Institute New York works with our partners to bring you visual arts and meaningful cultural experience home. The virtual tour of the “Golden West?: Jan Sawka’s California Dream” exhibit of Jan Sawka at The Robert and Frances Fullerton Museum of Art (RAFFMA) at Cal State in San Bernardino, you can now view in high quality online at home.

“Golden West? Jan Sawka’s California Dream” is one of two thematic shows of this artist that is currently on view at an academic museum (the other show is called “Jan Sawka: The Place of Memory (Memory of Place) at the Samuel Dorsky Museum of Art at SUNY New Paltz in the Hudson Valley of New York State). “Golden West?” examines how Jan Sawka envisioned the American West, from his visions prior to exile from Poland, to his experience of Los Angeles while exhibiting there during the 1970’s and early 1980’s. Paintings and drypoint prints present explorations of commodification, exploitation, and the dual faces of a society that is quick to abandon the hyped-up novelties of just the day before.  Artworks confront issues such as the objectification of women and present landscapes littered with abandoned objects and garish billboards. One painting offers a haunting look at the writer F. Scott Fitzgerald, the great author, whose downward spiral ended in Hollywood. A selection of works are from the collection of the late Robert Schulberg, a close friend of Sawka’s who was instrumental in helping the Sawka family escape deportation from France, their first stop in the West, back to Poland. 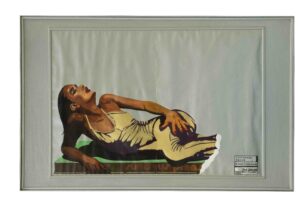 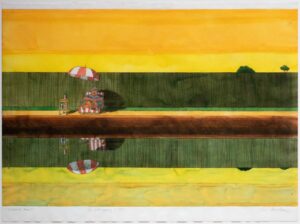 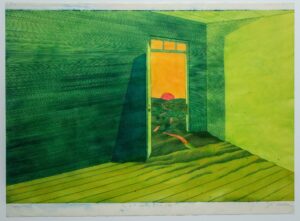 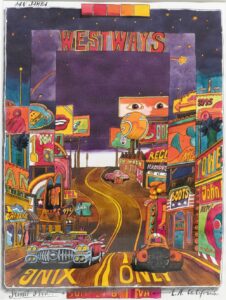 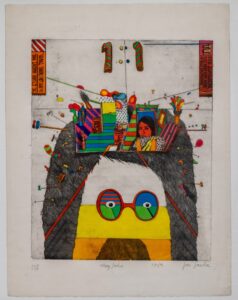 The friendship between Schulberg and Sawka, two men of different backgrounds (Polish, Catholic, from the intellectual class under Soviet oppression; and American, Jewish, risen from the poverty of the recent immigrant class to prosperity and influence in media and art) began in Poland in the 1970’s and lasted until Robert Schulberg’s death in 1990. Robert Schulberg, was an important figure in the dream machine of Western media, a person of power and authority based in media industry. He was an expert in radio marketing, an executive with CBS, and a cousin of the legendary screenwriter, Budd Schulberg. This status placed him in a complex dichotomy, as someone who represented the power of the media that he aimed to subvert at the same time. Over many years, Robert Schulberg encouraged Jan Sawka and helped him with business matters, especially helping him to establish himself in the Los Angeles art scene. This unique collaboration was a rock-solid, informal agreement which was not transactional, not based on profit, but on a deep mutual understanding and respect.

While still living and working in Poland, images of America, focused especially on California, began to work their way into Jan’s art, forming an organically growing complex of interlocking symbols and signs, the meaning of which became richer and more multivalent over the years, as the American Dream of California was later infused by his very real experiences. The transgressive sources of inspiration and information under communist rule, almost invariably challenging to obtain and to share behind the Iron Curtain, helped Sawka to build his visionary image of America.

And the lodestar of that image, the bright jewel in the crown of America, the Golden West of the West, was California. For young Americans coming of age in the1960’s, California represented a dream of endless summer, expansive experience, and freedom.

The thematic narration of the artwork selection from the Schulberg collection at RAFFMA include critiques and explorations of the ambiguity of the “dream” of America and California in particular. The image, the dream of the “Golden West,” was employed by Jan as a form of mediated content and once it appeared within the context of communist Poland, it was perceived as a suspect. Western cultural products that entered into Poland and fell into Jan’s hands immediately fell under the kind of skeptical scrutiny as the social and cultural practices and products of the Polish regime. The art works that Jan did in reference to the “The Dream of the Golden West,” were clearly seen as subject to manipulation, resembling a pervasive ambiguity, thus evoked the motion of resistance to the system.

Organized by The Robert and Frances Fullerton Museum of Art at California State San Bernardino in partnership with the Polish Cultural Institute New York, and with the support of the Consulate General of the Republic of Poland in Los Angeles.

The Robert and Frances Fullerton Museum of Art, nationally accredited by the American Alliance of Museums, houses a collection that includes Egyptian antiquities, ceramics and contemporary art, and hosts ca. 10-12 temporary exhibitions a year. Located at Cal State San Bernardino, RAFFMA presents the largest public display of ancient Egyptian art in Southern California. The exhibition, Journey to the Beyond: Ancient Egyptian in the Pursuit of Eternity, will be on display through April 2021. Visit the RAFFMA website for more information.