VisionIntoArt (VIA)
and
The Polish Cultural Institute New York
present

The third annual FERUS Festival comes for the first time to National Sawdust, the new Brooklyn arts space where VisionIntoArt (VIA), the festival’s development branch, now makes its home. This four-day extravaganza of new music, dance, and visuals in six performances from January 14-17, offers a snapshot of the innovative interdisciplinary collaboration for which VIA and its founder, composer Paola Prestini, are so justly celebrated. New York magazine says of VIA “You couldn’t ask for a better one-stop survey of what’s happening in new music now.” The festival features artists hailing from places ranging from Poland to Zimbabwe – including Nora Chipaumiré, Leo Genovese, David Krakauer, Kelsey Lu, Hafez Modirzadeh, Ashley Robicheaux, Kathleen Tagg, Shamar Watt, Jffrey Zeigler, and award-winning Polish composer and vocalist Agata Zubel.

Building on their workshop performance at the previous FERUS Festival in May 2015 at Pioneer Works, Agata Zubel, “one of Europe’s most accomplished and internationally successful contemporary classical composers and vocalists” (The New York Times), reunites with Avery Fisher Prize-winning cellist Jeffrey Zeigler, formerly of the Kronos Quartet, for a multimedia collaboration with performing artist and dance, theater, and film choreographer Ashley “Robi” Robicheaux on Thursday, January 14, 2016.

Program of the FERUS Festival

Agata Zubel (born in 1978 in Wroclaw, Poland) is an award-winning composer and vocalist. She graduated with honors from the Karol Lipinski Academy of Music where she studied composition with Jan Wichrowski and voice with Danuta Paziuk-Zipser. In 2004 she received her PhD in music. She has performed at prestigious venues and festivals of contemporary music around the world. Her repertoire is broad, ranging from Caccini and Vivaldi to works by Berg, Copland, Schnittke, Schoenberg and Sciarrino as well as contemporary Polish composers. She has received numerous awards for her compositions, including the top award at the 60th UNESCO International Composers Rostrum in May 2013 for Not I, which also received the Polonica Nova prize in 2014. She works with such distinguished ensembles as the Klangforum Wien, the London Sinfonietta, the Seattle Chamber Players and others. She received commissions from Deutsche Welle, the Wratislavia Cantans Festival, Sacrum Profanum Festival in Krakow and the Ultraschall Festival in Berlin, among others. 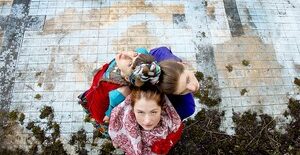