Inauguration of a mural by Polish artist Mona Tusz in tribute to Marie Sklodowska-Curie.

On the initiative of the Polish Institute of Brussels, in homage to Marie Curie-Skłodowska, a mural was created by the Polish artist Mona Tusz as a part to PARCOURS Street Art of the City of Brussels – an exceptional woman whose scientific work is recognised throughout the world, on the occasion of the 110th anniversary of her 2nd Nobel Prize and her 1st participation in the Solvay Congress in Brussels. Inaugurated on 04 May 2022, in the presence of Delphine Houba, alderman for Culture of the City of Brussels, Agnieszka Bolecka, director of the Polish Institute in Brussels and the artist Mona Tusz. 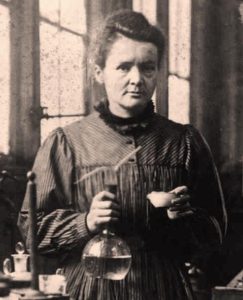 Maria Skłodowska-Curie (1867-1934) was the first woman professor at the Sorbonne, the first to receive the Nobel Prize (she won two, one in Physics and one in Chemistry) and the second to be inducted into the Pantheon. Marie Curie née Skłodowska will have been recognised by all as one of the greatest scientists of the 20th century who changed the place of women in society.

“I am one of those who think that science has a great beauty. If I see something vital around me, it is precisely that spirit of adventure which seems to me ineradicable and akin to curiosity.” 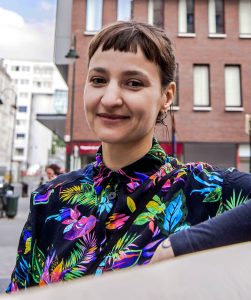 Mona Tusz – a graduate of the Academy of Fine Arts in Katowice – has been working mainly on projects in urban spaces since 2007. The main field of her activity is street mural painting. In her works she creates an esoteric world of spirit and emotions, filled with biological textures and cosmic structures.  In 2019, she received the Katowice Mayor’s Award in the field of culture for “extraordinary and poetic murals, as well as for her artistic activity involving various social groups. In 2020, she was awarded a grant from the Ministry of Culture and National Heritage.

“Starlight has to travel light years before it reaches the Earth, hence the saying that when you look at the stars you see the past. I see Maria, a pioneering scientist and two-time Nobel laureate, as a bright reflection in the present. And there is no exaggeration in that, her body was laid in a lead grave.”

Inauguration of the mural :

Solidarity with Ukraine – a recital of

04 06.2022 Arts, Events, News, Others
2022 © Instytut Polski w Brukseli | Wykonanie: sm32 STUDIO
Scroll top Scroll down
This website uses cookies to improve your experience. We'll assume you're ok with this, but you can opt-out if you wish. Read More ACCEPT
Privacy & Cookies Policy