Polish Film On Tour, initiated by the Polish Institute in Düsseldorf, presents for the eighth time a selection of the most successful Polish films of the past two years, which have received great acclaim at international festivals in Berlin, Toronto, Venice, and among the Polish public. The series presents the latest trends in Polish cinema to German-speaking audiences in Aachen, Bochum, Düsseldorf, Münster in Germany and St. Vith in Belgium.

Janina Duszejko, an elderly woman, lives alone in the Klodzko Valley where a series of mysterious crimes are committed. Duszejko is convinced that she knows who or what is the murderer, but nobody believes her.
https://youtu.be/QQHD9awysVg

It’s a scorching hot summer. Maciej Kornet and his beloved daughter Wiktoria set out on another journey across Poland. They are up for a long series of tennis tournaments. The two have been training together for twelve years and are inseparable. Wiktoria meticulously follows her dad’s programme: a strict diet, exhausting workouts, 100% focus. She is growing tired of the routine and longs for some freedom…
https://youtu.be/sFTeTBA64iM

Inspired by real events. Daniel had a spiritual awakening while serving his sentence in a youth detention center for second degree murder, but his criminal background prevents him from becoming a priest once he is released.

This project is being carried out in partnership with the Polish Institute in Düsseldorf (Germany), Kino Corso (St Vith), Film Kino Text – Jürgen Lütz eK, Imagine Film Distribution S.A and IKH Pictures Promotion. Thanks to them for making this project possible! 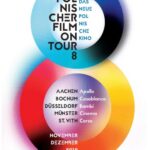