August 1st – Anniversary of the victims of the Warsaw Uprising

The Warsaw Uprising broke out on Tuesday, August 1, 1944, at 17:00 PM. Every year on that hour the city of Warsaw stops for one minute of silence to commemorate the victims of the uprising

Every year on that hour Warsaw honors the insurgents and traffic and pedestrians come to a stop to commemorate the victims of the Uprising.

The Warsaw Uprising turned out to be the most significant act of resistance in German-occupied Europe.

It was one of the most important and traumatic events in the history of the city.

Though planned to take a few days, it lasted more than two months.

The Uprising lasted 63 days and some 30,000 Home Army soldiers from the Warsaw district took part in the fighting.

Only 10% of them were armed. Most of the fighters were young people in the 11-18 age bracket.

of the original chronicles. It tells the story of the Warsaw Uprising as viewed through the eyes of a US airman who escaped

from a Nazi prisoner-of-war camp and two young reporters, cameramen for the Bureau of Information

and Propaganda of the Polish Home Army.

The Warsaw Uprising Museum also made the movie “City of Ruins”. The movie shows the sheer scale of destruction

wrought on Warsaw after the uprising.

“Postcard from the Uprising”. This is the first Polish feature movie produced in VR technology (Cinematic VR).

in August 1944. This card affected his life in surprising ways.

The applied imaging technique gives the impression of two-sided reception of depth and distance.

As a result, the viewer, putting on special goggles, has the impression of being ‘inside’ the film world.

More about the project: http://www.konceptkultura.pl/pl/content/seans-%E2%80%9Ekartka-z-powstania%E2%80%9D

For further reading about this project 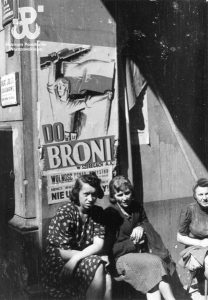 Our fifth webinar in the series Polish Talk - Mondays with JHI will be dedicated to Rachel Auerbach, one of the three surviving members of the Oyneg Shabes group
08 03.2021 History

Meeting from the series What's New, What's Next? Book Talks by Prof. Antony Polonsky will discuss the history of the Jewish community in Poland and it`s the research
11 02.2021 History

The 30th Anniversary of the Visegrad Group

Today we celebrate the 30 th anniversary of the "Visegrad Group" by a special illumination of the Presidential Palace in Warsaw
09 02.2021 History, News
2021 © Instytut Polski w Tel Avivie | Wykonanie: sm32 STUDIO
Scroll top Scroll down
In order to ensure the highest quality of our service, we use files called cookies.
When using our website, the cookie files are downloaded onto your device.
You can change the settings of your browser at any time. See out cookie policy. Cookie settingsACCEPT
Privacy & Cookies Policy