In 1973, a new graduate of Saint Martin’s School of Art made what might have been considered a rather odd career move. Instead of continuing to train at the modern facilities in London, Andrzej Klimowski – the London-born son of two Polish migrants – decided to move to communist Poland and study at the Warsaw Academy of Fine Arts. It helped that Klimowski’s first language was Polish and that he’d already spent a few lazy summers with family friends in Poland. But nonetheless, he was making a conscious decision to study at a school with fewer resources, under a political system that censored the arts and culture.

If you’ve ever seen a Polish film poster, you might understand why Klimowski moved to Warsaw. He was drawn in particular to Henryk Tomaszewski, a Professor of Graphic Arts at the Academy of Fine Arts and one of the key figures in the Polish School of Posters. While Western theatre and film posters were focused on the images and names of key actors, Polish graphic designers combined symbolism, humour and painterly aesthetics to create vivid interpretations of their cultural subjects. This unique approach thrived under a communist system. Censorship encouraged the use of visual metaphors; diminished resources demanded a more creative approach. Most importantly, cinema screenings and theatre productions weren’t incentivised by the free market. This meant that Polish posters had no commercial role – designers could instead indulge their own artistic inclinations. If this all sounds a bit abstract, have a look for yourself – here’s Wiktor Górka’s poster for Carbaret,  Bronisław Zelek’s poster for The Birds, and Jakub Erol’s poster for Alien.

Klimowski’s work is distinguished by his use of photocollage and images of his family, as well as his obsession with faces, eyes and demonic likenesses. One of the first Klimowski pieces that I saw was his poster for Omen, featuring a photo of his son’s body with a gargoyle-like monster perched in place of his head. Shortly before the Omen poster, Klimowski had designed a mysteriously evocative poster for Chinatown and one for Nashville, the latter of which was awarded a prize by the Hollywood Reporter. This led to a deluge of commissions for the artist, including his now-iconic posters for Taxi Driver and The Godfather Part II. After returning to the UK in the 80s, Klimowski continued to create images in his idiosyncratic style, notably a series of Milan Kundera book covers, as well as an anti-racism poster and the most recent poster for the Kinoteka Polish Film Festival.

Back in the UK, Klimowski was forced to deal with the demands of the free market, where the dark voyeuristic dreamscapes of his creations were not necessarily as desirable as they had been in communist Poland. The same can be said for contemporary Polish graphic designers, who no longer hold the same social capital or employment prospects as Klimowski and his peers did. This is immediately clear in present-day Poland – although some theatre posters maintain bold aesthetics and a hint of allusion, it’s all too common to see commercial film posters that simply foreground key protagonists’ faces or popular actors’ names. Nonetheless, I have the overwhelming feeling that Poles are proud of their design history. Just last week, I saw Witold Dybowski’s 1984 poster for Return of the Jedi on a Żoliborz café wall. Among the vintage shops of Kraków’s Kamizierz district, it’s easy enough to spot classic reprints for sale, such as Wiktor Górka’s Hunting in Poland poster, originally designed in 1961 to promote tourism to the country.

This pride is reflected in the new generation of Polish artists who continue to make posters in the older style. One of the most successful modern designers is Ryszard Kaja (whose father Zbigniew Kaja was a member of the Polish School of Posters). The younger Kaja makes myriad posters – notably, this Godzilla-inspired design for a film night of ‘Japanese Monsters’ – but his most prolific and well-known work to date is ‘Posters from the series POLAND’. This series consists of 120 designs depicting towns, tourist destinations and classic symbols of Poland. Some posters straightforwardly present landmarks; others play with the names of places and the images they might evoke. Before I met the red squirrels of Łazienki Park face-to-face, I’d already seen them showering on Kaja’s Łazienki (which also means ‘bathroom’) poster. Nicolaus Copernicus is given a fitting astronomical tribute on the poster for his hometown, Toruń. All is bared on the poster for Chałupy, Poland’s most famous nudist beach.

Ryszard Kaja’s extensive series may be ubiquitous across Poland, but it’s not the only form that contemporary Polish posters take. I once visited a café-cum-gallery in Wrocław, which coincidentally had a poster exhibition on. Sipping at my coffee, I couldn’t take my eyes away from the red sheet with a silhouette of Joaquin Phoenix’s character from the 2013 film Her (plus the tiny pair of legs in his pocket). The graphic designer in question, Maks Bereski, was born in 1989 and is consequently a generation further from the original Polish School of Posters than Kaja. Regardless, his ‘Plakiat’ project endorses those same older techniques of metaphor and striking visual simplicity to reimagine (primarily English-language) film posters. With 174 posters to date, there’s plenty of Bereski’s work to enjoy. I’m particularly fond of his design for The Neon Demon, but his recent poster for Jurassic Park: Fallen Kingdom is an excellent example of the multiple meanings and enticing visuals he creates.

Earlier this year, Netflix actually commissioned Bereski and a handful of other Polish artists (namely Anna Goszczyńska, Dawid Ryski, Jan Kallwejt, Justyna Frąckiewicz and Tymek Jezierski) to design posters for some of their exclusive films, including Okja, Mudbound and First They Killed My Father. Although the streaming service decided not to use the designs, it shows the enticing draw of Polish poster aesthetics for those in the West – from Klimowski in the 70s, to Netflix today. 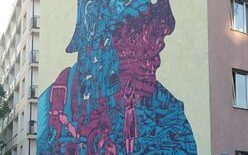 On The Road...Through Poland with Richard Greenhill: Reclaim the streets
11 11.2018 #100, Blogs
2020 © Instytut Polski w Londynie | Wykonanie: sm32 STUDIO
Scroll top Scroll down
In order to ensure the highest quality of our service, we use files called cookies. When using our website, the cookie files are downloaded onto your device. You can change the settings of your browser at any time. See out cookie policy. Read More ACCEPT
Privacy & Cookies Policy
Necessary Always Enabled