Righteous Among the Nations – Monthly story

At the age of 15, Jan never looked back. He risked his life to help Jewish friends who were his neighbours in his childhood. This is another story about personal courage against all odds

How good neighbors overcame the flames of war.

At the age of 15, Jan never looked back. He risked his life to help Jewish friends who were his neighbours in his childhood. This is another story about personal courage against all odds.

Helped by his mother, Jan began smuggling food into the ghetto to help his friends. He faced a lot of danger in order to keep in touch with the Wierzbicki family. In 1941, he found himself inside the ghetto when he was arrested and all the Jews who were together with him at the time were executed. Jan was interrogated, brutally beaten by the Germans and released a couple of days later thanks to a bribe paid by his mother.

In the summer of 1942, with the onset of deportations from the Warsaw ghetto, Jan once again succeeded in sneaking into the ghetto and extracting Itzik Wierzbicki and his children Noah and Naha. They found shelter in an apartment that belonged to the family. In 1943, Jan smuggled the Wierzbicki family to a new hiding place that was arranged in advance. There, they were joined by a friend of the family, Walter Cykiert. One month later, the Germans began the operation to liquidate the Warsaw ghetto. The Warsaw Ghetto Uprising started. For the next six weeks the Wierzbicki family, Walter Cykiert and their saviours, watched the Germans put down the uprising. Building after building went up in flames and the surviving Jews were sent to death camps.

After the suppression of the Warsaw uprising in October, 1944, the inhabitants of Warsaw were ordered to leave the city but Jan decided to stay and keep hiding together with his Jewish friends. Together they held out until the liberation of Warsaw in January, 1945.

After the war, Wladyslawa married Itzik Wierzbicki and Jan married Wierzbicki’s daughter, Naha. Sometime later, they all emigrated to Australia.

On February 10, 1983, Wladyslawa Konstanska and her son, Jan Konstanski, were awarded the title of Righteous Among the Nations by Yad Vashem. 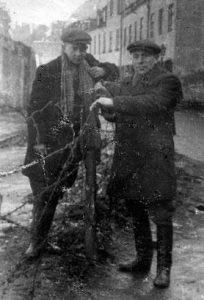 Scheduled Righteous Among the Nations

Righteous Among the Nations – Monthly story

Jerzy Pozimski was a prisoners in Auschwitz. Because of a special job, he was able to move freely in the camp. He made contact with a group of female prisoners and saved the lives of their relatives by moving them to different jobs
27 04.2019 Righteous Among the Nations

Righteous Among the Nations – A Monthly