The Lvov-Warsaw School (LWS) was a real phenomenon. It was a Polish school of thought widely considered to be a philosophical movement that placed Polish philosophy at the forefront of international discourse of contemporary philosophy

The Lvov-Warsaw School (LWS) was a real phenomenon. It was a Polish school of thought widely considered to be a philosophical movement.

The Lvov-Warsaw School carved out a niche in the world of philosophy and on the scientific map of Poland. The philosophical movement that originated at the LWS placed Polish philosophy at the forefront of international discourse of contemporary philosophy.

The LWS began as a general philosophical school but steadily moved towards logic. Kazimierz Twardowski founded the school when he became the chair of the Lvov University in 1895. Twardowski’s first students were Wladyslaw Witwicki, a psychologist who translated almost all of Plato’s works into Polish, and the logician, Jan Lukasiewicz. They were both thrilled by Twardowski’s lectures and personality thus generating a sense of vocation among them.

The school’s work was interrupted by the outbreak of World War II. Twardowski’s students dispersed and went on to teach at various universities in Poland. Gradually, Warsaw became the second center of the philosophical school and, therefore, it became known as the Lvov-Warsaw School.

As was the case with most of the academic institutions in interwar Poland, half of the students at the LWS were of Jewish origin and among them Alfred Tarski, Adolf Lindenbaum, Mordechai Weisberg, Moses Presburger, Dina Sztejnbarg and others. World War II put an end to the LWS as an organized philosophical enterprise. However, it was later continued individually by its representatives. Some of them continued their intellectual activity after World War II and left a distinctive imprint on Polish academia.

In 1985, a book written by professor Jan Wolenski about the Lvov-Warsaw School – Filozoficzna Szkoła Lwowsko-Warszawska (Eng. Edition Logic and Philosophy in the Lvov-Warsaw School) – was published. Thus, the school gained international exposure and the train of thought it represented is considered to have greatly contributed to modern philosophy of the 20th and 21st centuries. 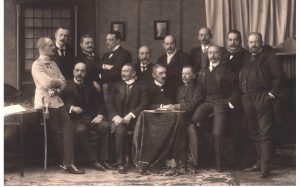 My Internet of the Future – an

A contest that calls participants to express their vision for the future of our digital world. registration by October 8th 2021
20 09.2021 News, Science

Research in Poland – a new platform

Research in Poland is a new platform aims to promote Poland as an attractive country for conducting research and developing a scientific career to international scientific community
21 07.2021 Science