100th Anniversary of the Battle of Warsaw

The Battle of Warsaw, also known as “The Miracle of the Vistula” is considered to be

Against all odds, Josef Pilsudski’s army vanquished the Soviet forces and forced them to retreat

from the gates of Warsaw. This put an end to the Polish-Soviet war.

a symbol of Polish patriotism.

Every year on August 15, Poland celebrates The Polish Armed Forces Day to commemorate this heroic battle.

that was built to mark the 100th anniversary of the Polish victory over the Soviets and shows a number of scenes from the clashes between the Polish and Soviet forces.

This interesting project is based on a collection of letters, photographs, memoirs of people who participated

in those events, on diaries discovered in archives and even newspaper clippings.

and the hardship endured by the Polish people.

Some of the exhibits in the website have never been shown before!!

View some of the excerpts from the diaries from the collection exhibited in the framework of the project:

Józef Piłsudski in a letter to his later wife Aleksandra Szczerbińska
The first step is over, you must now be very surprised and a little scared by these great successes, while I am now preparing the second and setting up troops and materials for it to be as effective as the first. So far I have crushed the entire Bolshevik 12th Army, but it is indeed fluff: I have almost half of its composition as prisoners; from the number of material taken it becomes dizzy, the rest is greatly demoralized and scattered, and my loss is extremely small; I will not count 150 dead and 300 wounded on the entire front. I won this great battle with a bold plan and extraordinary energy in execution.

(Isaac Babel (volunteer in the 1st Cavalry Army, writer
A moan beats from the village, horses are exchanged, they give cutlets in return, they seize the grain, they confiscate the cattle, complaints to the head of staff. Cherkashin is arrested, he smacks a peasant with a knout […] Angry, slim Sokolov tells me – we turn everything to dust, I hate war. So why are all of them – Żołnarkiewicz, Sokołow, here during this war? All this unknowingly, by the force of inertia, without thinking. Good system. […]

We found Piłsudski’s appeal, knights of the Commonwealth … A touching appeal. The bones on the graves of five generations of defenders are whitening, our ideals, our Poland, our bright home, our homeland looks at you and trembles, our young freedom, one more effort, we remember you, all for you, soldiers of the Commonwealth. Moving, sad, there is no iron, Bolshevik arguments – no promises, and these words: order, ideals, free life. Ours is on top!

Zofia Romanowiczówna (resident of Lviv) in the diary
The wild hordes are closing in on us. Our brave, our extraordinary young army has been holding them back, defending them with all our strength – but how long will these forces last when there is such an insane numerical advantage? A sharp emergency here, and a new panic since yesterday. […] And not only for us here it is so dangerous, so terrible – after all, this flood of wild beasts would irresistibly spill over to the west. 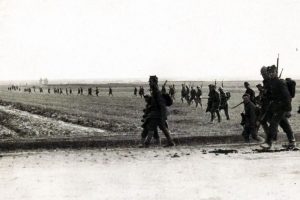 Book POLAND 1939: The Outbreak of World

The 30th anniversary of the “Treaty on

The 30th anniversary of the signing of the "Treaty on Good Neighborhood, Friendly Relations and Cooperation" between Poland and Ukraine
18 05.2022 History, News
2022 © Instytut Polski w Tel Avivie | Wykonanie: sm32 STUDIO
Scroll top Scroll down
This website uses cookies to improve your experience. We'll assume you're ok with this, but you can opt-out if you wish. Cookie settingsACCEPT
Privacy & Cookies Policy