Polish Victory for the Freedom of Europe

On 15 August 2020 we solemnly celebrate the 100th anniversary of the Battle of Warsaw – a culminating point of the Polish-Soviet War (1919–1920) and one of the most decisive events in the history of Poland, Europe, and the world.

When independent Poland was being re-born in 1918, its existence became endangered by the Soviet Russia which, propagating self-determination of nations, in fact aimed at imposing its totalitarian communist ideology upon them. Poland was the first step on the path towards a further conquest.

However, in August 1920, not just Poland’s but also entire Europe’s future was determined by the Battle of Warsaw of 1920, victorious for the Polish Armed Forces. Not only did the battle bring defeat to the Red Army, but it also suppressed the attempts to sovietise European nations by the forceful, armed spread of the world proletarian revolution. At the time, the Polish Army, thanks to the determination and consistency of its soldiers, and the talent of its chief commanders, saved Europe from being engulfed in war yet again. The losses on the Polish side in the 1919–1920 war with the Bolsheviks were, as for that time, heavy – a hundred thousand dead, including many killed in action, or missing, and twice as much wounded.

Repelling the Bolsheviks’ attack on the Poland’s capital was a landmark moment for reinforcing the independent Poland as well as other, newly established national states in Central Europe. It averted the risk of the collapse of the Versailles system and provided Europe with an opportunity for attempting peaceful international co-existence.

The Battle of Warsaw sends a universal message that we need to counteract dictators and that making sacrifices is effective in protecting freedom.
Lord Edgar Vincent D’Abernon, an English diplomat and a member of the Interallied Mission to Poland who witnessed the events of August 1920, described them in his book titled The Eighteenth Decisive Battle of the World. Warsaw, 1920 in such words: „The modern history of civilisation knows but few events of greater importance than that of the Battle of Warsaw of 1920. And it knows of none other which would be so little valued …“ 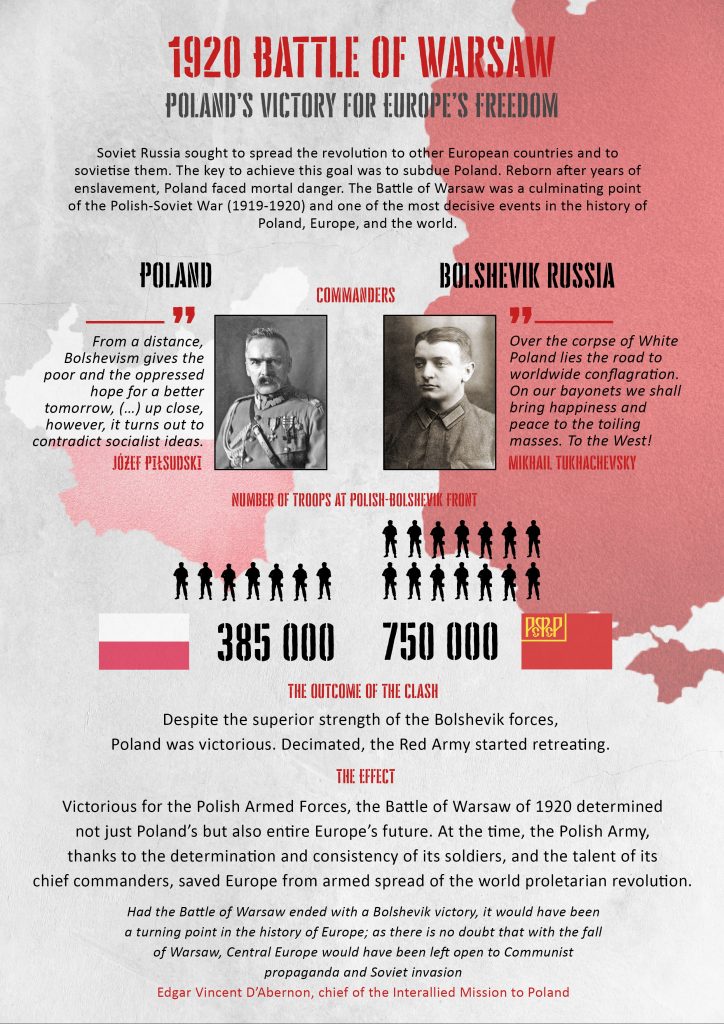 Ministry of Foreign Affairs of the Republic of Poland

Historical challenges and false directions – Europe at the crossroads

This website uses cookies to improve your experience while you navigate through the website. Out of these, the cookies that are categorized as necessary are stored on your browser as they are essential for the working of basic functionalities of the website. We also use third-party cookies that help us analyze and understand how you use this website. These cookies will be stored in your browser only with your consent. You also have the option to opt-out of these cookies. But opting out of some of these cookies may affect your browsing experience.
Necessary immer aktiv
Necessary cookies are absolutely essential for the website to function properly. This category only includes cookies that ensures basic functionalities and security features of the website. These cookies do not store any personal information.
Non-necessary
Any cookies that may not be particularly necessary for the website to function and is used specifically to collect user personal data via analytics, ads, other embedded contents are termed as non-necessary cookies. It is mandatory to procure user consent prior to running these cookies on your website.
SPEICHERN & AKZEPTIEREN